I’ve thought about this a lot and I have made my decision, so let’s first talk about who almost made the cut but fell just short.  Haydn would be the “first alternate” on my mountain.  Haydn created most of the musical forms that were later perfected by Mozart and Beethoven, most notably the symphony and the string quartet.  He was prolific in a way that no one has been since, writing over 100 symphonies and 80+ string quartets.  Unfortunately, quantity does not always mean quality.  Yes, many of his works are great (the Op. 76 string quartets, the London Symphonies), but a lot of his music seems as though it was just sent down a composing assembly line.  Also, I find that a lot of Haydn’s music lacks any emotional weight.  Yes, the music of the time was generally trite and formal, but even Bach was able to insert some feeling into his mathematical compositions.

Richard Wagner is the “second alternate.”  He suffers from the opposite problem of Papa Haydn.  He wrote immensely emotional and important music in the mid-19th century, but just didn’t write enough.  Probably, he spent too much time criticizing others like Brahms, or writing another article filled with anti-Semitic nonsense.  Sounds like a joke, but it’s unfortunately very true.  Wagner was not, shall we say, a nice fellow.  He spewed venom at anyone who didn’t agree with his musical ideas (Schumann and Brahms mostly), and was a noted anti-Semite who wanted to rid music of “Jewry.”  Suffice to say, his ideas and personality make it a little difficult to enjoy his otherwise beautiful music.  Tristan and Isolde is one of the most important pieces of music ever composed (for how it redefined tonality), but there just wasn’t enough music like it from Herr Wagner.

So, for those who are time-starved, here’s the TL;DR version. 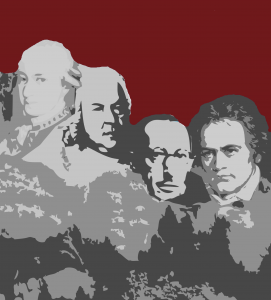 Let’s do these in chronological order.  Ah, Bach (for lovers of MASH).  JS Bach was a genius.  Classical music would not be if not for JS Bach.  His music has a precision about it that almost transcends the artistic qualities.  He pretty much wrote the rules on counterpoint and four-part writing.  Then there’s the Well-Tempered-Clavier which redefined the concept of tuning and keyboard performance.  Keyboards in Bach’s day were tuned differently depending on what key a piece was written in, causing music with lots of accidentals to sound pretty bad.  Bach intended this piece to be played on one harpsichord/clavichord tuned with every note exactly the same in each register.  For a composer who was criticized for “ma thematic music,” this is pretty revolutionary.  Simply put, it is because of Bach that we got Haydn and then Mozart. 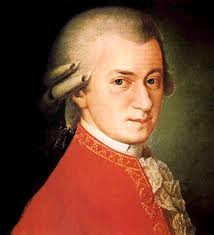 W.A. Mozart took the forms that Haydn invented and made them perfect.  When I think of Mozart’s music, I think of perfection.  Not one note too many or too few.  Mozart is to classical music what the Beatles were to rock and roll.  He was a rock star from an incredibly early age.  His early music is very Haydn-esque, but then as he matured (some say he never really matured lol) he pushed the boundaries a bit and wrote some of the most divine and beautiful music ever composed.  Opera was where Mozart excelled.  He wrote revolutionary operas that redefined musical theater.  Some of Mozart’s most exquisite music comes from his operas.  If not for Mozart, there could not have been Verdi, Puccini, or even Wagner.  Also, without Mozart and Haydn, there would not have been Herr Ludwig van Beethoven.

I will not hide the fact that Beethoven is my favorite composer.  He wrote my favorite violin concerto, my favorite string quartet, and the greatest symphony ever composed (the 9th – duh).  Beethoven pushed the boundaries of classical music more than any composer until the mid-20th century.  He single-handedly dragged western music kicking and screaming into the romantic period.  Even his first symphony which seems very innocently Mozart-like was criticized for having too much woodwind and brass and sounding like a “band.”  His middle string quartets were considered unplayable by some of the best players of the day.  In case you haven’t noticed, a theme among the Rushmore composers is progress and forward thinking.  Beethoven was the first major composer (certainly the first to do it successfully) to use choir in a symphony.  And let’s not forget – he was almost completely deaf when he wrote his most progressive music.  Nearly all of Beethoven’s music (and definitely all after 1804) was revolutionary, which places him on my Mt. Rushmore of classical music for sure. 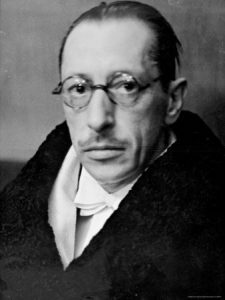 Now we have the most controversial pick for my South Dakota mountain.  Igor Stravinsky redefined both tonality (Schoenberg started the trend of atonality, but Stravinsky cleaned it up) and rhythm.  Any time you need to rewrite passages of a symphonic work to make it easier to play (the Sacrificial Dance from the Rite of Spring) you know you’ve got some complex rhythms.  Not only that, but the premier of The Rite of Spring caused a riot due to its primitive and violent rhythms.  Stravinsky tried his hand at 12-tone or serial music, but his most successful pieces are (loosely) based in tonality.  It is because of Stravinsky that we have Copeland and Elliot Carter.  Like Tchaikovsky, Igor’s music is often based on folk song, and very beautiful.  The Octet and L’Histoire de Soldat are two terrific examples of his less violent side.  He even put a little jazz in some pieces.  The Symphony in Three Movements has a fun passage near the beginning that really grooves!

So there it is.  Classical music’s Mt. Rushmore.  Certainly there is discussion to be had, and I invite you to let me know (with as few expletives as possible) what you think.  Find me at facebook.com/chuckgviolin or on twitter at @chuckgviolin, or just comment here.  Either way, get involved and let’s hash this out.

Find What You Need

This post contains links to products and/or services.  When you click on these links (affiliate links) and make a qualifying purchase, you pay no additional money, but I get a small commission.  Running this site ain’t free, and your contributions are always appreciated.  Thank you.