The Chicago Cubs and Me – What Do I do Now? 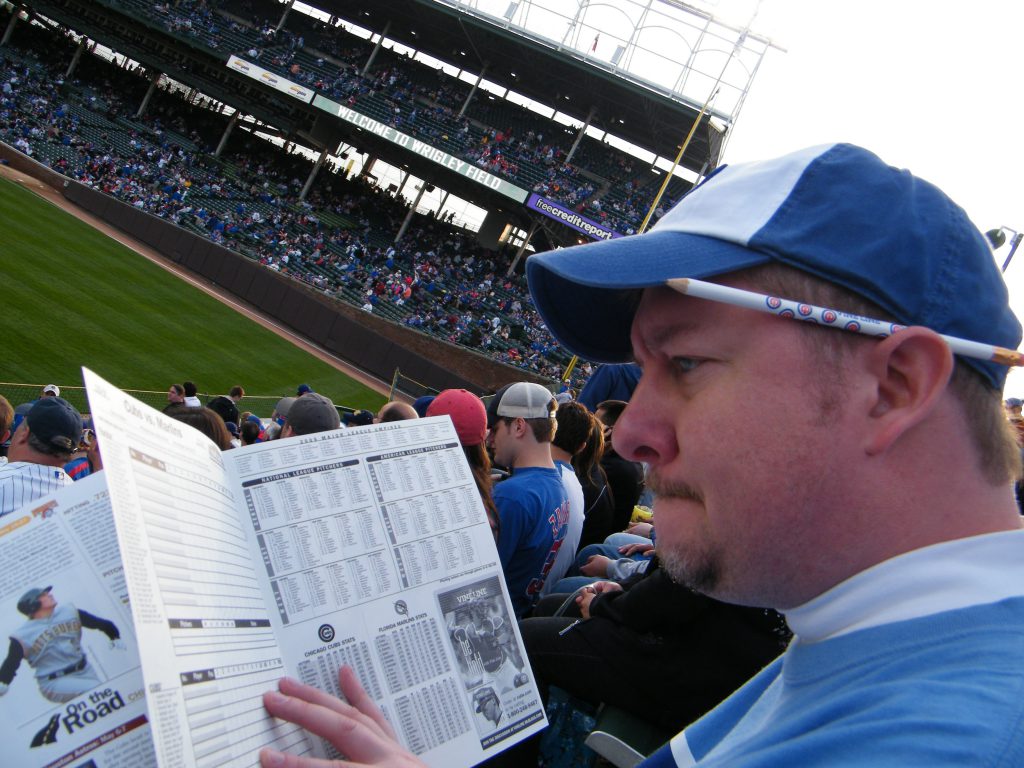 Greetings.  Today’s post is very off-topic for my blog, but very necessary given recent events.  I can’t believe I’m typing this.  The Chicago Cubs just won the world series.

After 108 years of epic futility, the Chicago Cubs have won the world series.  I’ve been a Cubs fan since birth (in the Western suburb of Park Ridge).  Both my parents and grandparents were also rabid Cubs fans.  My grandmother took her son (my father – duh) to game 7 of the 1945 World Series, which was the last World Series game the Cubs would play until this year, 2016.  Sadly, grandma never got to see them in another World Series, but we did take her to a Cubs playoff game in Miami in 2003 (see left).  Unfortunately, the North-siders didn’t win that game (thanks, Zambrano), or any other games that postseason and were eliminated in tragic fashion by the Florida Marlins.

My grandmother loved her Cubs.  When we spoke, we always talked about them because she kept up with the team like a kid with baseball cards.  She knew every player, no matter what year it was, and she knew every win and loss because she either watched it on WGN or read about it in the Tribune (which she continued to get on her doorstep after moving to Florida in the early ’70s).  My father took me to games when I was a youngster in Chicago.  After we moved to New Jersey, we continued to watch the games on WGN and even tried to go when the Cubs were in town to play the Mets.  Mom and Dad saw them in Tampa once inter-league play started.  They even came to Atlanta to watch them from time to time.

My own history of the Chicago Cubs has highlights and (many) lowlights over the years.  Here are the big moments I remember in my lifetime:

The Chicago Cubs This Season

After the surprise playoff run of 2015, the 2016 season was an interesting proposition entering spring training.  Would the Cubs be better yet this season or would they do what they did in 1985 (they followed a division title with pure garbage on the field the next year)?  Well, they answered that question pretty early in the season, starting 24-6, their best start since 1907.  That would be a pattern this year when it came to statistics; everything the Cubs did was the first time since 1945/1908/1907/1938 that that happened.  Normally you see stats that say first time since 1984 or 2003.  That is how extraordinary the Cubs’ season was this year.

As for me, I worked very hard this season to keep an even keel.  I was ecstatic inside that the Cubs were destroying the rest of MLB every game, but I wanted to make sure they reserved their best baseball for October and November.  That they did.  After a terrible July (12-14) and few bad weeks heading into late-September, the Cubs won a ton of games down the stretch and clinched very early.  My blood pressure began to rise as the Chicago Cubs headed to the playoffs, a place where Bartmans, billy goats, and black cats have a tendency to appear.

They made easy work of the Giants.  After winning the first two at Wrigley, they lost game 3 at SFO which triggered a slight panic thinking about 1984.  They erased that red alert with an awesome win in game 4 to move on to the NLCS.  I rooted hard for the Dodgers because I wanted no part of the Mets’ pitching staff.  The Dodgers put a scare in me as they took a 2-1 lead in games after silencing the Cubs’ bats.  No problem though, the Cubs bats awoke (bats were afraid, I ask Jobu to come), and they took care of business to get to the World Series for the first time since my dad was at game 7 in 1945.

The first thing I thought of when the Cubs won game 6 of the NLCS was my father.  He suffered for so long since that day in 1945.  Unfortunately my mother and grandmother were already gone, but dad at least was alive to see the Cubs in the World Series – finally.

The World Series was an almost surreal experience for me.  I watched every game (having to endure Joe Buck which was tough), and for a while, things looked pretty bleak.  The Cubs and Indians traded victories in the first two in Cleveland, and I was pretty excited for three games in Chicago.  That excitement wore off in a hurry with two straight losses and complete futility at the plate.  Watching player after player strike out looking, or first-pitch swinging an infield pop-up, was horrific.  I saw the series slipping away quickly.  Just like that, we were down 3 games to 1 and in big trouble.

Game 5 was a dramatic and close win for the Cubs.  The bats seemed to be coming around, but we only scored 3 runs.  It was enough, and we headed back to The Mistake by the Lake.  We seemed to leave our hitting woes in Chicago because we exploded for 9 runs in game 6.  It was at this point that Joe Madden made the first of several managerial decisions that baffled me.  He put in the closer, Aroldis Chapman with a huge lead.  He pitched fine, but they were unnecessary innings that would come back to bite us in game 7.

The 7th game of the 2016 World Series was one of the most dramatic games I’ve ever seen, and not all in a good way.  At one point I remarked to my wife that I might need some of my dog’s heart medication.  Inside, I went from elation at seeing us take a big lead into the 5th inning, to head-scratching watching Madden take out starting pitcher Hendricks after 4 2/3 innings of great work.  Lester came in (which was expected, just not this early) and promptly allowed the Indians back into the game with a wild pitch that scored two runs.  My panic subsided with David Ross’ home run in the top of the 6th, but the specter of another tragic loss was in the air.

The Chicago Cubs held on to the 3-run lead for a few innings of Lester’s best pitching.  Then, Joe Madden struck again by putting Chapman in the game in the 8th inning.  He was tired.  Everyone saw it.  His stuff was not good.  The Indians tied the game and Cubs fans everywhere, including me were saying, “Oh @#$!, not again!”

Then, I thought maybe I was dreaming, but Chapman came out and pitched the 9th.  My wife then said exactly what I was thinking, “Madden is gonna be crucified if they lose.”  Somehow we got through 9 innings (despite another hair brained idea to have Baez bunt with 2 strikes) still tied.  Then, as if God suddenly realized that one of these historically inept teams was going to win, the rain came and brought the tarp out for a delay.

The Chicago Cubs Won – What Do We Do Now?

I could barely breathe at this point.  A rain delay?  In the World Series?  Game 7?  Turns out, the short delay was probably the best thing that could happen to a Cubs team that appeared dazed and broken-hearted.  Jason Heyward (the underachieving but still motivation leader) held a meeting and pumped the Cubs up during the delay.  They came out and scored 2 in the top of the 10th.  Carl Edwards Jr. came in to try to get the save, but couldn’t get the third out.  The Indians scored one, but no more as Mike Montgomery got the final out.

I didn’t scream or yell or jump around.  I exhaled, seemingly for the first time since the 8th inning, and I just sat there.  My wife asked me if I was all right and I said yes, but I honestly don’t know what I was feeling.  It’s been two days and I’m finally able to write this, but I don’t think the World Series victory has really sunk in yet.  Part of me is lost.  The Cubs aren’t the loveable losers anymore.  They are champions.

What do we, long-time fans, do now?  There was a certain kind of chivalry or sanctity in cheering for a team that never wins.  Now that’s gone. I’m certainly not complaining.  My father deserves to see his dreams come true after 78 years on this earth, 71 of them waiting for the Chicago Cubs to play in the World Series again.  Anyone remember the film The Day After?  The world is different now.  Cubs fans have come out of their living rooms to a World Series championship.  No it’s not like emerging alive after nuclear Armageddon, but the entire world feels different to me.

I will continue to cheer on my Cubbies.  They have given me something that is irreplaceable.  I honestly thought the Chicago Cubs wouldn’t win in my lifetime, but now I just want to see them win again.  And again and again.