Greetings, my intrepid readers.  I’m taking a moment away from interesting violin-related drivel to bring you my review of Star Wars-The Last Jedi, which I have now seen twice.  Yes, I liked it.  Not all of it, but if you want a TL;DR version, I liked it the first time, and loved it the second time.  I even caught a few things I didn’t get the first time.  Read on for more.  Please look out though, because there are some minor spoilers ahead.  Nothing specific, but if you haven’t seen the film yet, you might read things that might spoil an otherwise clean slate for viewing. 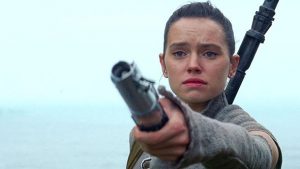 As we all heard in the months prior to its release, The Last Jedi begins mere moments after the end of The Force Awakens.  The Resistance is on the run, and General Hux is closing in.  Kylo Ren (Ben Solo) is recovering from his injuries, and is conflicted leading Supreme Leader Snoke to doubt his resolve.

Rey hands a haggard-looking Luke his long lost lightsaber (not the hand attached to it though – that would be gross).  She explains that the Resistance needs him to save the day, but he is resistant (get it?) to join on.  He has traveled to the “least findable place” in the galaxy to be alone and away from the force and the conflict it brings. Rey also confesses that she needs Luke’s help because “this thing that has always” been with her is confusing and she doesn’t know what to do with it – even though she used it to kick Kylo Ren’s ass in The Force Awakens.

Things happen, blah blah blah, Laura Dern is hot, yadda yadda, crystal dogs, porgs, etc.  Luke does help, but not in the way we think, and Rey saves the day and what’s left of the Resistance.  Probably.

There has been heavy criticism of the major plot points, but this isn’t your mother’s Star Wars film. Was I pissed at times with what happened?  Absolutely, but I was equally pissed as a 10-year-old watching Empire Strikes Back.  The good guys don’t win very much in this film, and, spoiler alert, even when they do, they don’t really win. 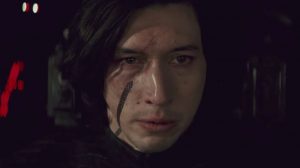 Rian Johnson wrote and directed this film and did an outstanding job.  JJ Abrams directed The Force Awakens but had help writing the script.  He also did a terrific job, but the two films could not be more different.  TFA was a New Hope-esqe rollick.  It had explosions, wonderful battles (c’mon, Rey cutting the power to the Falcon and turning upside down for Finn to shoot the tie-fighter?  Awesome!!), and Han Solo.  It was fun.  The Last Jedi is not fun.

TLJ is very dark.  Bad things happen,  A lot.  At times, there seem to be so many bad guys, you don’t know what to think.  The audience finds itself switching sides all over the place because there are so many twists and turns.  I found myself cheering for the bad guy only to have my heart broken to see what was really happening.  In the last film, Rey called Kylo Ren a monster.  In this film, he not only confirms it vocally to her, his deeds paint a very black picture.

One knock on this film has been its lack of character development.  I disagree.  While we didn’t see Luke’s journey to where he is in this film, his character has changed from an idealistic young Jedi to a bitter and grumpy old man.  I could have sworn I heard him tell Rey to get off his lawn.  Leia does things we all knew she could do but hadn’t, Poe becomes the cliche rebellious pilot, and Rey is now a charismatic leader instead of a frightened and lonely girl.  There is a brewing love triangle (something not tried since it was briefly hinted at in A New Hope – ew), and even C3P0 gets some rewarding time on screen. 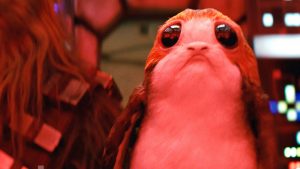 First off, the humor.  I loved most of it, but there were a few gags that felt forced (get it?) and very misplaced.  Luke has somehow force-conjured a sarcastic sense of humor, and I didn’t like a few things he did, starting with when Rey hands him the lightsaber (just terrible, in my finest Charles Barkley voice).  Just as in The Force Awakens, there are some very Earth-in-2017 lines of dialogue that seem out of place in a galaxy far away.  While hilarious, Poe’s “phone call” to General Hux at the beginning of the film was just like his “who talks first” bit with Kylo Ren in TFA – a little out of place.  And let’s not even talk about the “big-ass door.”

Snoke’s throne room had some very bad production design.  Like, really awful.  It looked like the stage at a high-school drama production.  And speaking of the throne room, there is a battle in there that should have been over in seconds flat given the powers of the the people in it, but they both struggle to defeat some pretty useless guards.  One wave of the finger and they should all have been dead.

Even though this film was very different than any Star Wars film before it, there were still some awful cliched plot points.  The hotshot pilot defying orders.  I can sense the good in you-type dialog.  Stoic leader sacrifices himself (or herself) to save the day.  And, in a unique-to-Star Wars cliche, the Millennium Falcon swoops in at the end of the film to (mostly) save the day.

I loved most of this film.  The highest praise I can give this film is – this seemed like what a Star Wars film would be like if directed by Stephen Spielberg.  Rian Johnson pushed all the right buttons.  Both Daisy Ridley and Mark Hamill gave Oscar-worthy performances.  There was a bitter-sweet vibe throughout because of Carrie Fisher’s death last year.  Adam Driver gave a wonderful bi-polar performance – quiet and ruthless one minute and exploding with uncontrolled rage the next.

At first I had a problem with the film’s abandonment of traditional 3-act structure, but now I think that’s what I liked most.  I was unclear where one act ended and the next began, but that increased the suspense.  Near the end, I knew someone important would die but the film kept me guessing as to which one.  There were hints for no less than three characters’ deaths, but the final payoff came in the last five minutes of the film.

Lastly, while the film abandoned traditional 3-act structure, the trilogy did not.  In fiction, the end of the second act is normally the low point for the protagonist, and to say the good guys are low after this film is like saying Attack of the Clones sucked.  You couldn’t be more correct.  The Last Jedi beautifully sets the table for Episode IX, and JJ Abrams will (I hope and pray) make a terrific third act.

The Last Jedi – The Music

Since I run a musical website and blog here, I can’t forget to say a word or ten about the music.  John Williams is, even at 85, the Godfather of science fiction film music.  He also wrote some other terrific music as seen here, but it’s Star Wars that put him on the map.  His scores for Episodes 1-3 are the best things about those horrible films – Duel of the Fates is among his best music ever.  Many thought his score for The Force Awakens was weak, and while I didn’t think it as strong as other films, I generally disagree.

People compare TFA and The Last Jedi to A New Hope and Empire Strikes Back respectively, and I think the same could be said for the music.  New Hope was excellent, but Empire was brilliant.  Sadly, Williams won an Oscar for the former not the latter.  TFA has a great score, but The Last Jedi is at least one step better.

Williams expands on the themes for Rey and Kylo Ren beautifully.  Kylo’s theme was especially troubling for me two years ago because it’s really only 4 notes long.  Now, that little motif is used to a most sinister effect.  The old material for Leia and Luke is not just rehashed but rather developed for their modern characters.  I might buy this soundtrack because I like it so much.  That is saying something because I’ve only ever bought two others – A New Hope and Phantom Menace.

Four Things That Make Me Warm and Fuzzy

Yes, I love this film.  I love it for many of the reasons so-called dedicated Star Wars fans hate it.  It is different.  We hate what we don’t understand, and we hate change.  This film is a major change from a “typical” Star Wars film.  The Last Jedi is probably the finest film in the series.  It may or may not be better than Empire, but it’s right up there.  I hope history treats it better than the fans have so far.

Find What You Need

This post contains links to products and/or services.  When you click on these links (affiliate links) and make a qualifying purchase, you pay no additional money, but I get a small commission.  Running this site ain’t free, and your contributions are always appreciated.  Thank you.